Poor Wallace had a nasty experience the other day. We were out running, and were quite close to a house's palisade fence, behind which an excited border collie was running back and forth. Wallace, excited to meet another dog, got a bit too close, and the collie popped its head through the bars, latched onto Wallace's nose, and pulled back through the fence. I smacked the collie off, but poor Wallace had a bleeding nose and cheeks. He was very sorry for himself. :( On the positive side, we met a lovely chonky Labrador named Spud; Spud is very sweet, and talked a little to Wallace. Wallce seems to be recovering OK.

The dogs are loving the sun lately, loafing about outside. Wallace has gone pretty much deaf, so he sometimes has to be awoken by touch. This entry was originally posted at https://claidheamhmor.dreamwidth.org/1069400.html. Please comment there using OpenID, or here.

I took leave last week, but basically relaxed at home and got a few things done. No work for a week was nice!

I did finally finish my RAF transporter and Tomahawk model kits, and here they are. Cole crane, RAF Queen Mary trailer with lorry, Curtiss Tomahawk plane with wing removed for transport, a military policeman and two motorcycle riders. 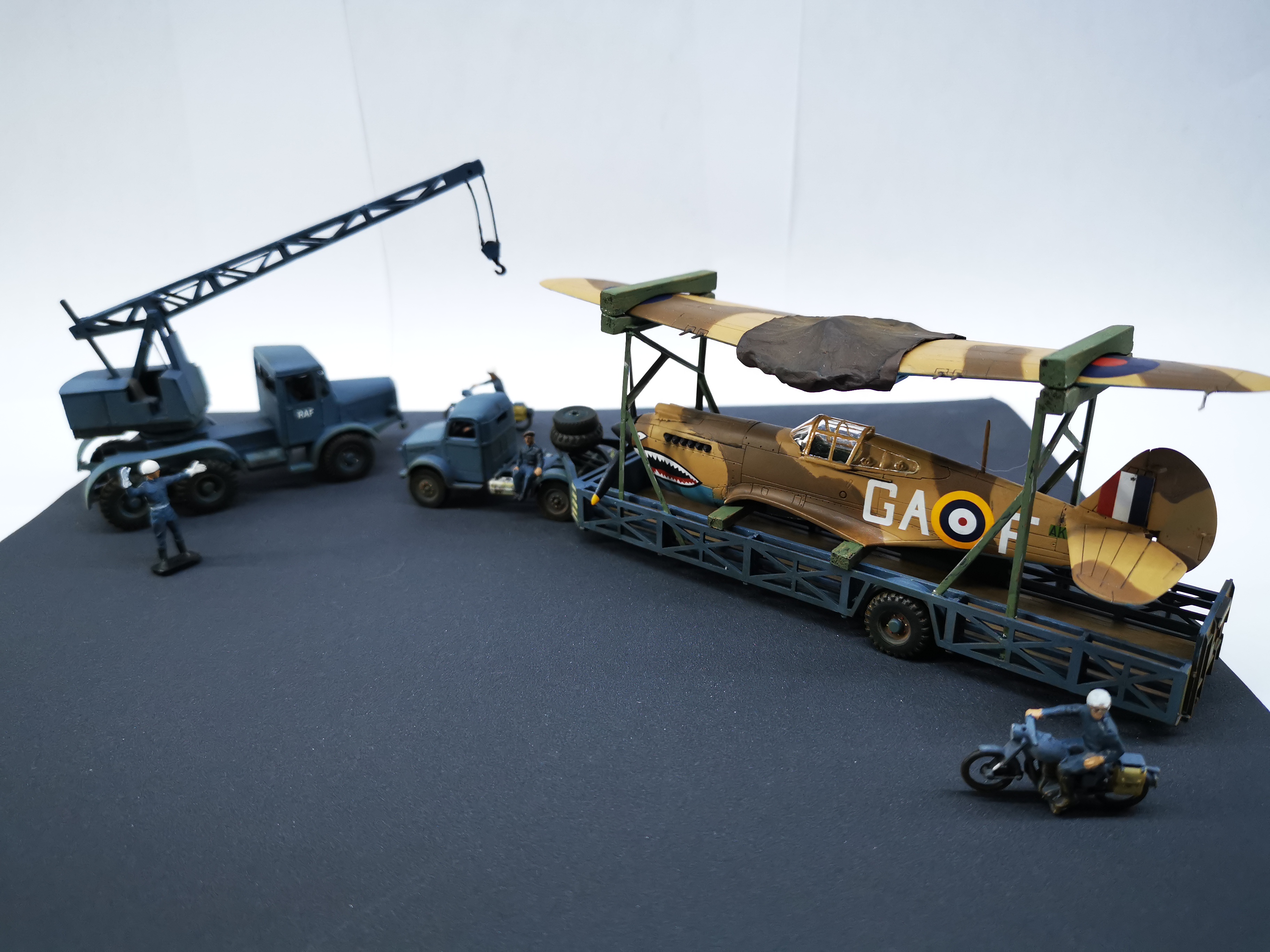 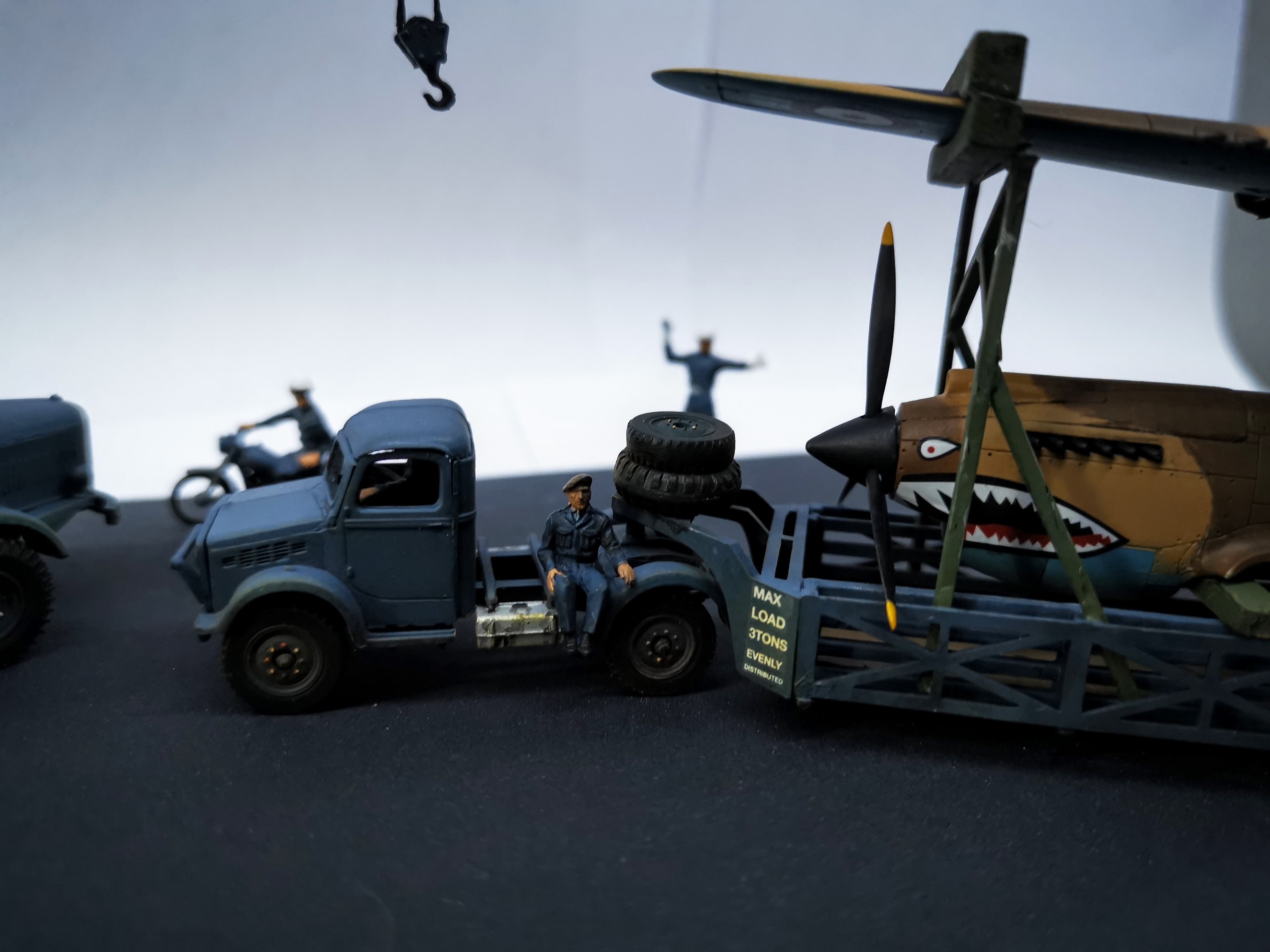 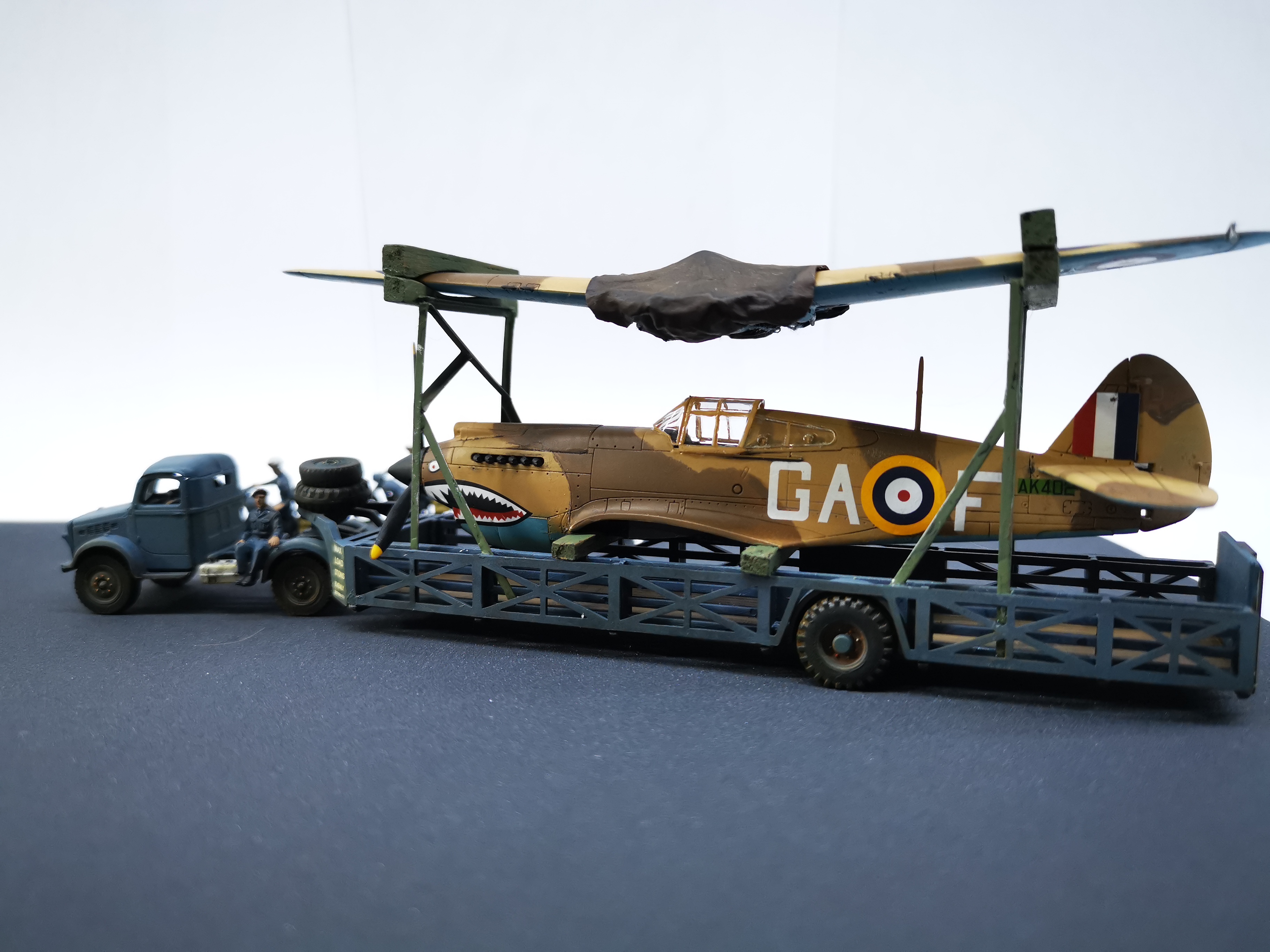 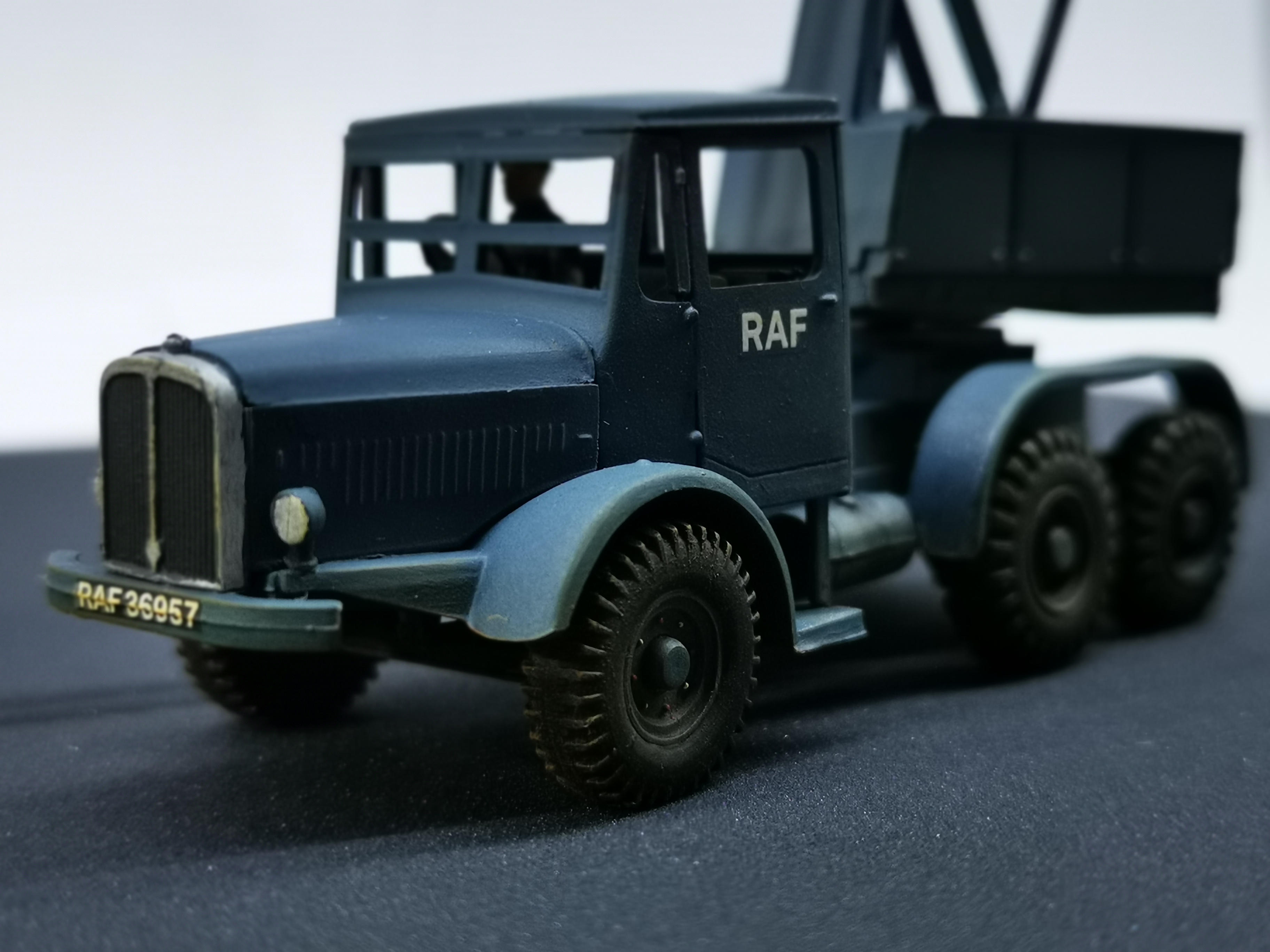 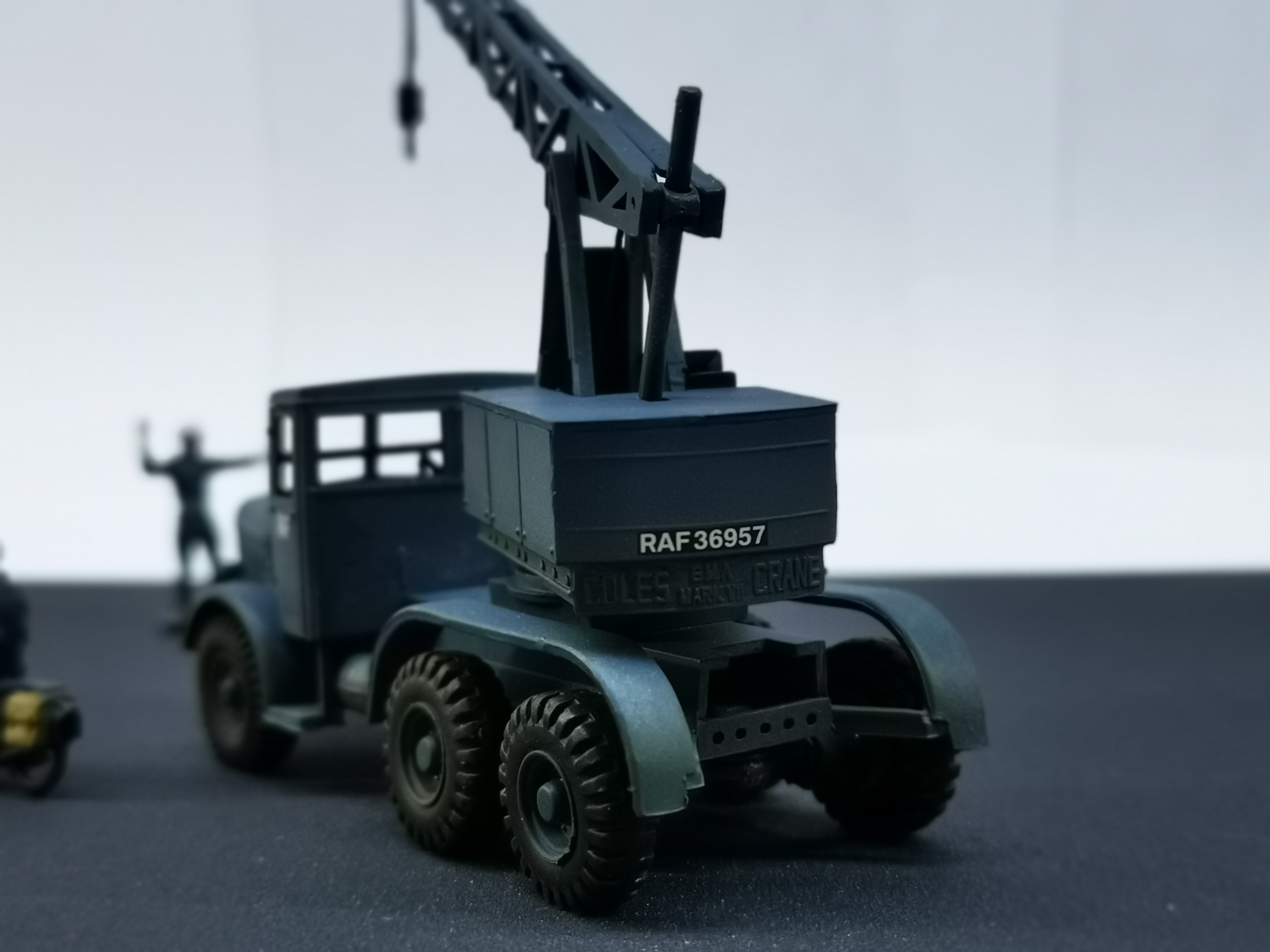 Next on the list is a 1/48 scale Focke Wulf Fw-190S-8, a two-seat trainer. The kit plastic is terrible, but it has resin and laser-cut metal parts, so it'll be a new experience.

It loos like we'll be able to go back to the War Museum for the model club meetings, as long as there are only 50 of us, so I can take my models along on Saturday.

This entry was originally posted at https://claidheamhmor.dreamwidth.org/1068642.html. Please comment there using OpenID, or here.

Yesterday we took Nicky on her final journey to the vet. He'd said we should check her gums to see if she had internal bleeding, and the gums were bone white. She could no longer get up the little step into the kitchen, and was pretty much sleeping all day. We don't really know when we lost the real Nicky personality; she'd felt old and tired for ages, but she'd still been managing. Not any more. Dr Ernie was very kind, and we were with Nicky, touching her and holding her till the end, and we left her in her little ladybird jacket, under an old purple blanket. We were both in tears. Poor little girl.

Nicky came into Kat's life about 11 years ago, after her black spaniel Arthur died; she was two and a bit then, so she was about 13. Kat adopted Jody and Nicky - sisters apparently - and Nicky was so very timid. I met Kat some time after that, and grew to love them. Nicky suffered from itchiness, and was always on Medrol medication to help, and both were eventually on prozac because they got jealous of each other. Nicky would had been well suited as a single dog for an older person; she loved her cuddles and wanted people all to herself. She could be a jealous grump, but mostly she was a happy girl  often smiling, wagging her tail, and in younger years, walking while looking behind to check you were following her. She'd flop herself on her back for belly rubs. We're going to miss her. 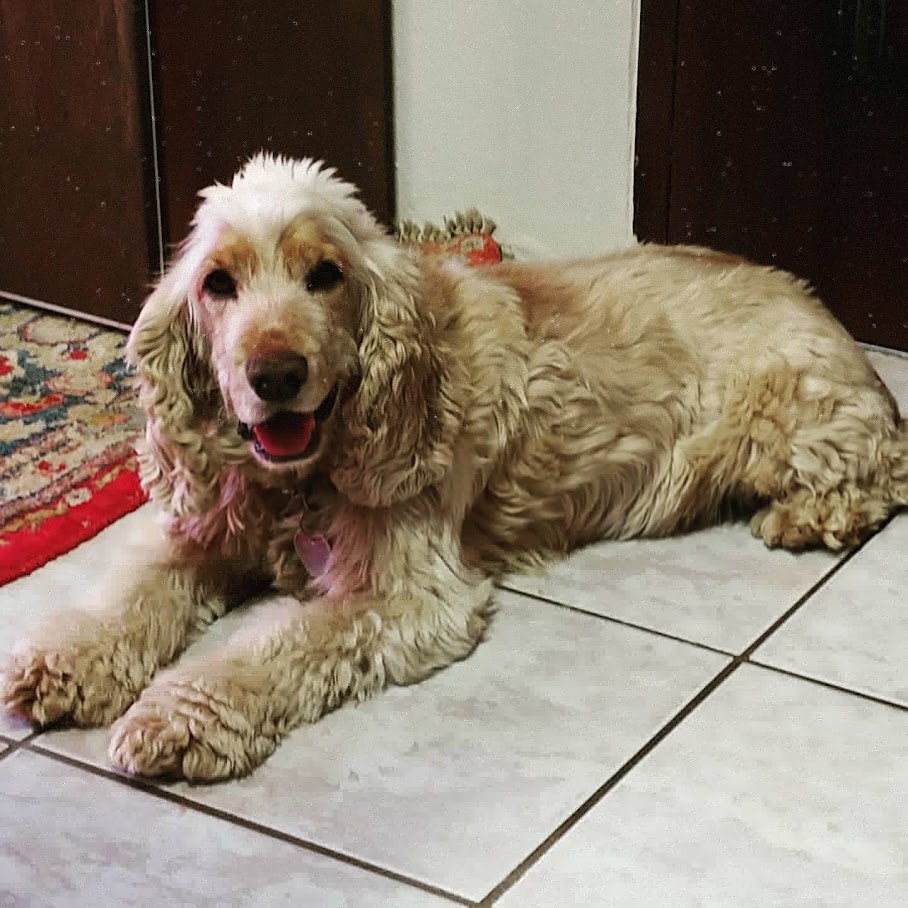 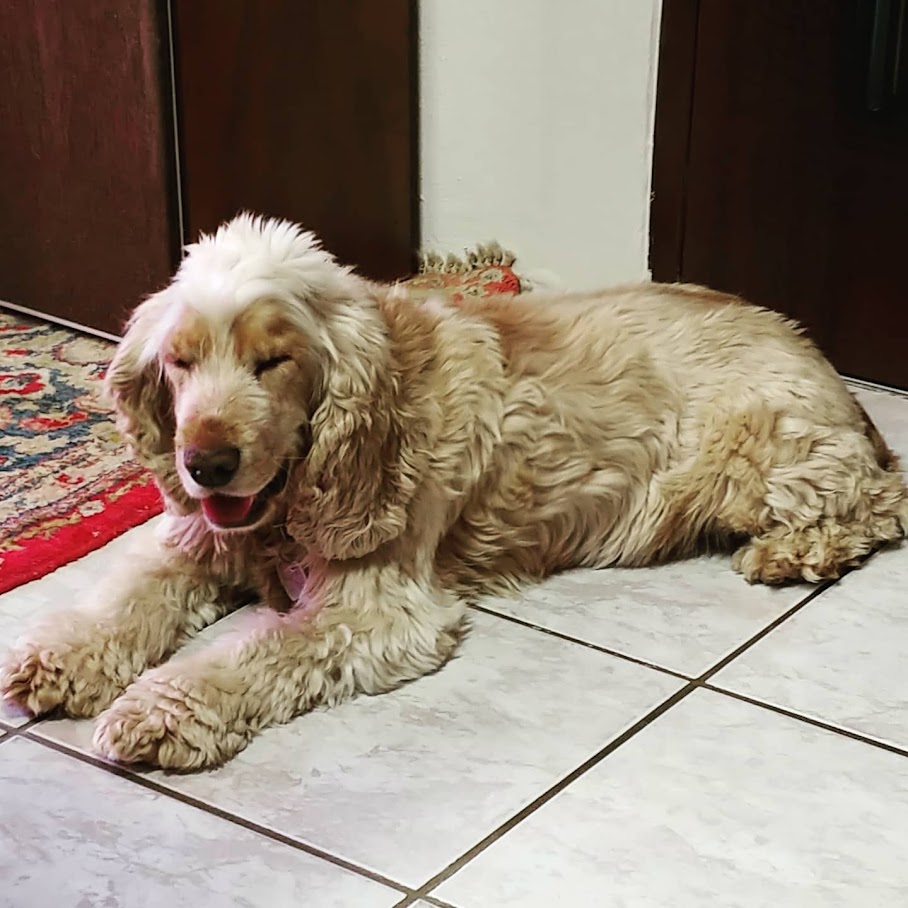 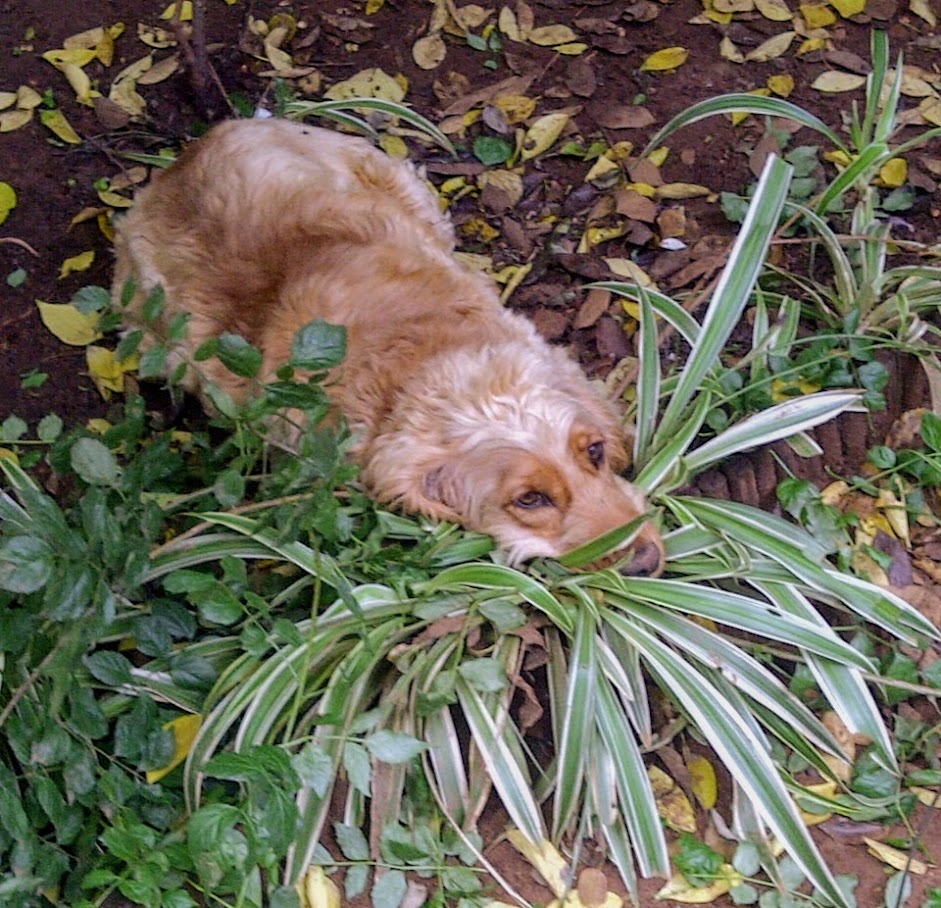 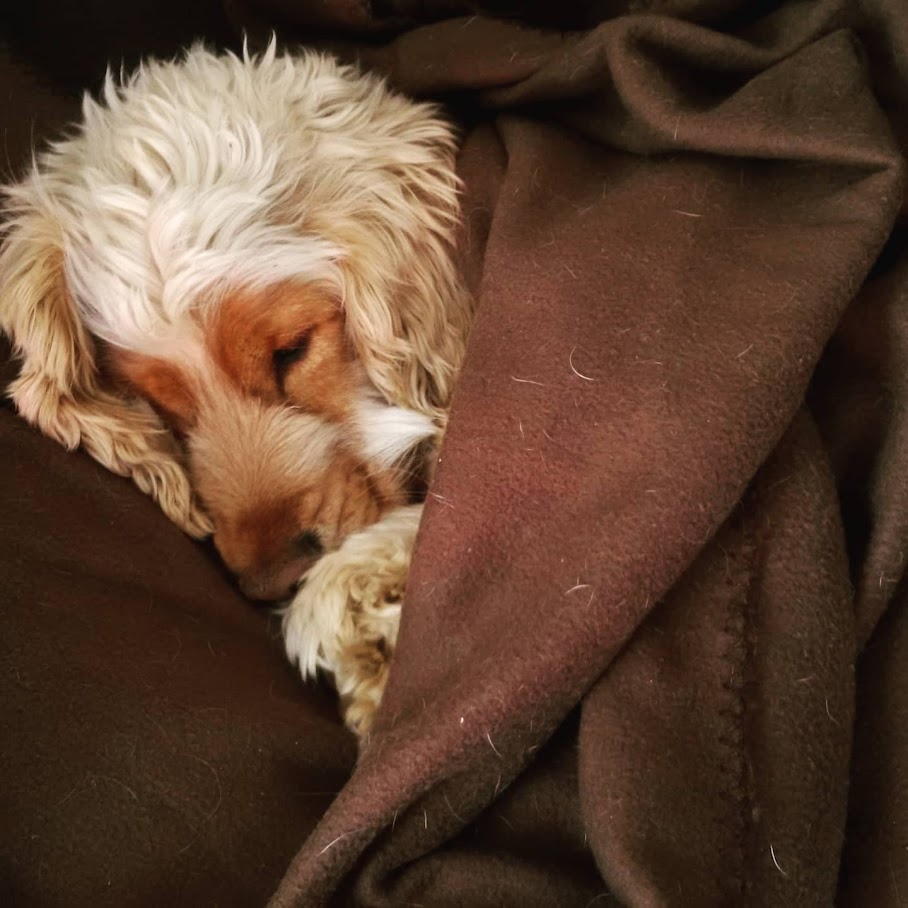 The other dogs seem a bit subdued, but the are very pleased they're now allowed toys to chew. With Nicky around, Jody would try to take Nicky's toys, and growling and fights would ensue. Our friends have all been very sympathetic. It's the first time for me taking one of my own pets on that journey, and I found it much harder than I thought it would be. It's weird, but sometimes I feel I hurt more for the pets I've lost than the people I've lost; maybe that's because I haven't lost anyone really close yet, or maybe it's because pets are so dependent on us.

This entry was originally posted at https://claidheamhmor.dreamwidth.org/1067620.html. Please comment there using OpenID, or here. 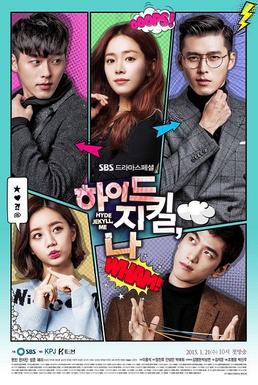 I finished watching a rather fun TV series. Hyde, Jekyll, Me is a Korean TV series from 2015. It's a bit of a drama/romance, I guess. Director Gu (Seo Jin) is an emotionless, ruthless, cold director of Wonderland, sort of a Korea Disneyland. Ha Na is the owner of the Wonderland Circus, and has recently returned from the US. Seo Jin,due to childhood trauma, suffers from dissociative identity disorder: he has a second personality, Robin. Robin hasn't been around for 5 years, due to Seo Jin's control, and he is kind, emotional, and a famed webtoon artist (who disappeared 5 years ago...). Seo Jin's psychiatrist supposedly has a cure for Seo Jin, but she is kidnapped, and Ha Na was a witness. Ha Na starts falling in love with Robin, and caring for Seo Jin.

I really enjoyed it, and more than just the entertainment, there were some interesting questions on identity. For example, Robin is a different person, but he shares a body with Seo Jin, generally awakening at night. Seo Jin and Robin have had to learn to live with each other, despite hate and jealousy.

Hyun Bin - who starred in Crash Landing on You - is brilliant as Seo Jin and Robin, and Han Ji-min plays Ha Na excellently too.


This entry was originally posted at https://claidheamhmor.dreamwidth.org/1064150.html. Please comment there using OpenID, or here.

I finally finished a model kit: the Academy kit of the Hawker Typhoon Mk 1B. The kit was decent, but the decals were terrible, too think, and silver-edged. Ah well. At least I finished the kit. 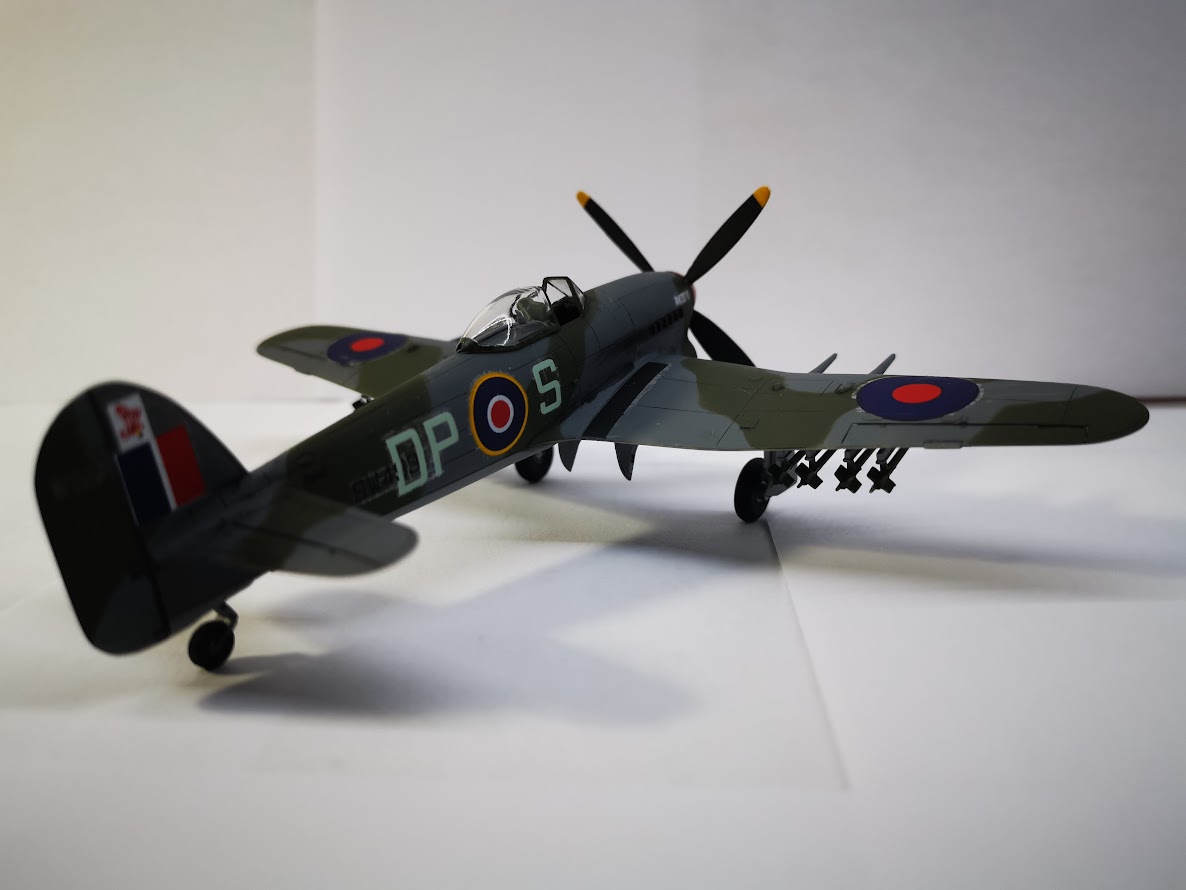 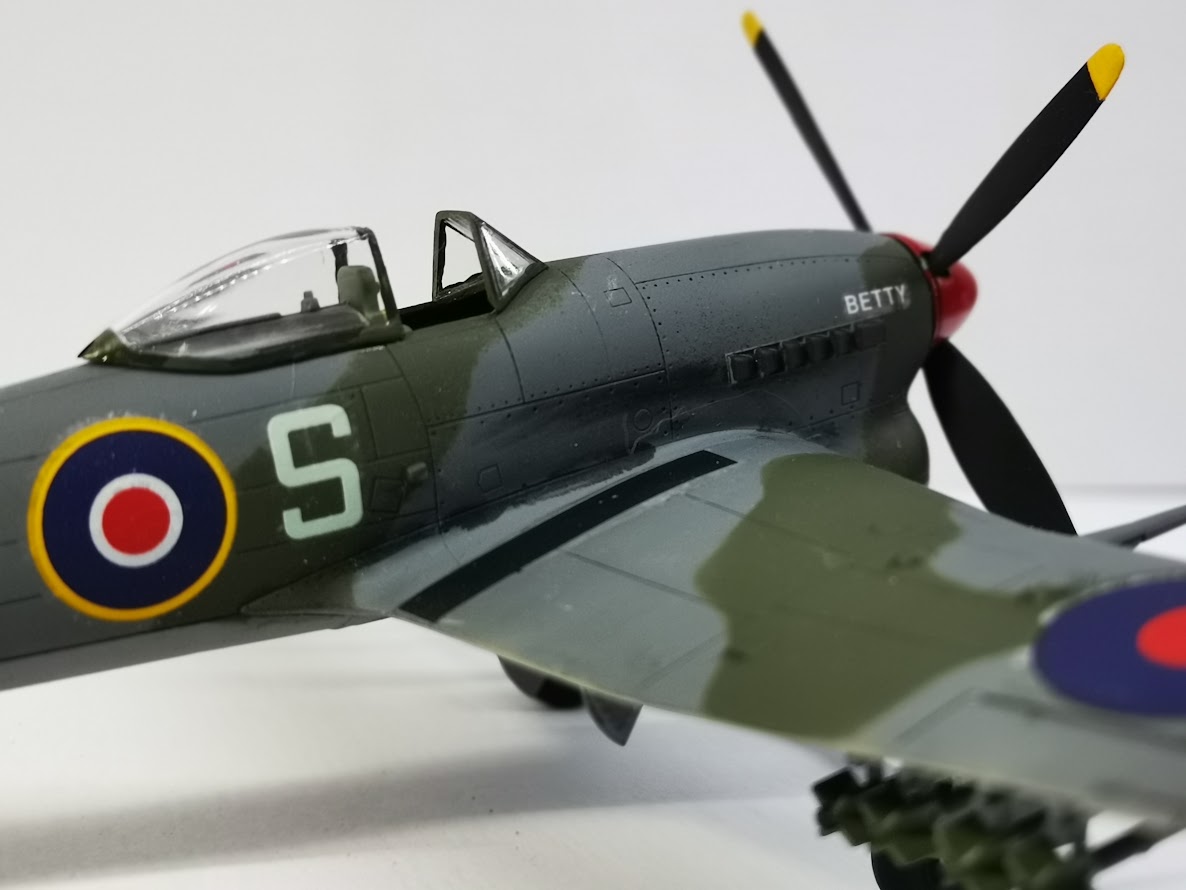 i'm still busy with the Curtiss Tomahawk with RAF trailer and crane. The aircraft is basically done, and the trailer and crane is mostly complete, but I have to finish the tarpaulin over the wing (I'm making it of tissue paper coated with diluted white glue), and the angle-iron structures that support the fuselage and wing on the trailer. 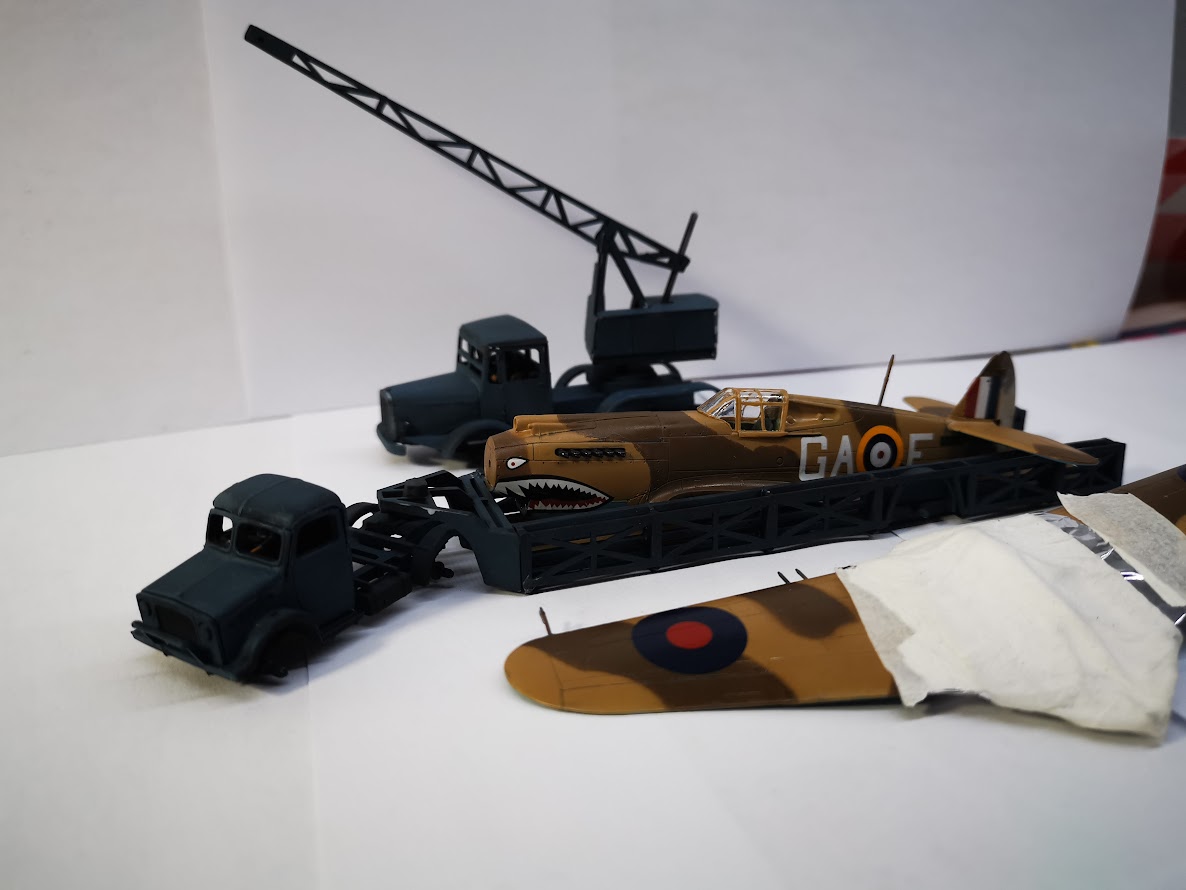 This entry was originally posted at https://claidheamhmor.dreamwidth.org/1063475.html. Please comment there using OpenID, or here.

With the loadshedding we've been subjected to, we're looking at better battery backups. My old, depleted, 600VA UPS is enough to hold up the router, fibre, and access point for only about 2 minutes, so I need to get a bigger one, maybe 2kVA. I'm looking around for good prices on those.

The battery for the gate and the garage seem OK, and we're not using them constantly, so that's OK. The alarm system and the electric fence, however, were only lasting around two hours on the batteries they had, so I've replace both with more expensive, higher capacity deep-cycle batteries. Hopefully that'll last the full four hours. There were only R400  each, not too bad if they last. This entry was originally posted at https://claidheamhmor.dreamwidth.org/1063411.html. Please comment there using OpenID, or here.

South Africa moves to Level 3 lockdown next month. The main changes are: The oddball one, though, is places of worship: they may open with a 50 person limit and with various precautions. This looks like a political decision pushed by the SA Council of Churches (though even the Jesuits think it's a bad idea). Why places of worship and not hobby clubs, or family get-togethers, or D&D, or other small social meetings? And how will charismatic churches handle it when they get 3000 people arriving at a service? Religious services are a hotspot, and I think this will cause more infections. I think any sort of social gathering like this is a bad idea, especially with our rates and deaths starting to increase rapidly. :( This entry was originally posted at https://claidheamhmor.dreamwidth.org/1059902.html. Please comment there using OpenID, or here.

My birthday gift, new running shoes, arrived. New Balance 860V9. My old ones were the V8, seen here in the pic. My new ones have about 38km so far, and they seem just fine. The old ones have about 975km, and my previous V8 shoes have 1390km. I use the new ones as clean road shoes, the older pair as park/trail shoes, and the oldest pair as mud shoes. 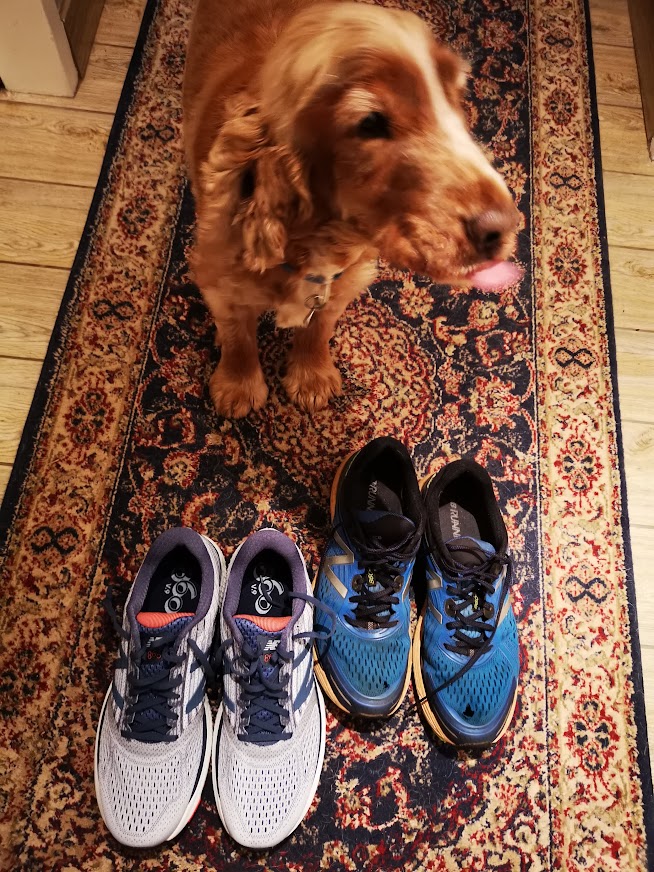 This entry was originally posted at https://claidheamhmor.dreamwidth.org/1059758.html. Please comment there using OpenID, or here.

Wow, I was really busy back in the heyday of LJ!